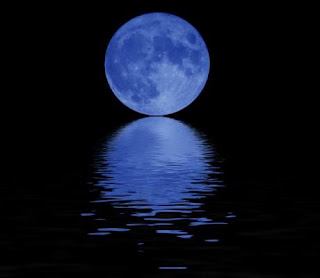 The beauty and power of the Blue Moon.

Tonight, August 31, 2012 we will be blessed with a Blue Moon.  The "blue moon" refers to the rare occasions when there are two full moons within the same month. The second full moon is termed the blue moon. This is an extremely rare and powerful moon.  During the entirety of the 20th Century there were only 40 instances in which a single month contained two full moons. A blue moon literally happens only about once every two and a half years. The next one won't occur until 2015.


The blue moon is noy only something  that occurs rarely, but it also has a history of portending luck, and having magical qualities. The occurrence of a blue moon is the perfect time to plant the seeds of long-term goals that will blossom in the sun of a future day.  Any goals forwarded and planned beneath the glow of the second full moon of the month are thought to have benefitial  qualities. The potency of the magic of the blue moon is said to be concentrated and passionate.
This is a perfect time to  concentrate on your Feng Shui Inner Work. Focus on you visualizations, affirmations, lists of what you are grateful for and your many blessings. Visualize it, and with the power of the Blue Moon your chances of achieving your goals is greatly enhanced.
Posted by Maria at 3:17 PM No comments: